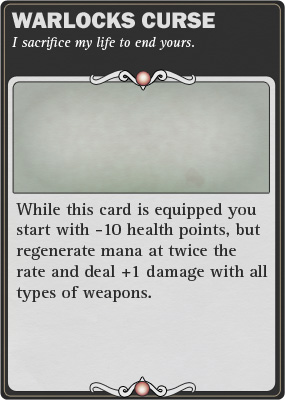 Character Classes for Card Dungeon. So yeah… here’s how I see it working. The player picks a class for his character (crusader, ranger or warlock) and one class card. You can see an unpainted example of the warlock cards here.

As the user progresses through the dungeons he will level up and be allowed to equip more than one card. The player is not restricted to using cards from only his class, but can mix and match if he so pleases. Been thinking about having some form of reward or bonus if the user goes pure class, but haven’t decided yet.

The user is also not restricted to the class cards he starts out with but can, at a cost, switch any or all class cards mid game. So if a situation occurs where the player decides that brute force (for example) might not work so well, he can simply switch some class cards around and he is now better prepared for the situation at hand.

So anyway… when that character dies, any class card discovered will now be available in the character select screen so the user can pick his favorite and not have to search for that one great card. My thoughts are that this will allow the user a great deal of flexibility in how they play Card Dungeon. One round the user might want to be a pure warlock. Next a mix between the warlock and ranger, etc, etc.