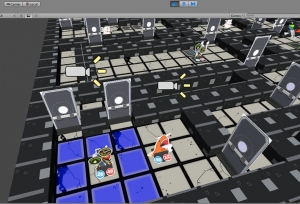 Update time! I am getting very, very close to having all the action cards painted (I set a goal of 100 action cards and I have 95 painted), and I am starting in on the inventorial cards the player can equip such as weapons, armor etc. I doubt we’ll have a 100 of each of those (gloves, boots, helmet, etc), but a fair amount of each armor piece so the user can switch them around.

On the coding side, things are moving along. We now have functional walls (temporary texture can be seen in the screenshot above) that separate the different rooms, we have doors that the user can tap to open (temporary texture above) and the random map generator has been tweaked and massaged. One of the things we tweaked was to have the random rooms a smaller max size to speed up the gameplay. Health counters work now for the enemies as well, so that’s great.

More importantly, we have also had some test runs of the game with some people and have received lots of great feedback. One of the major things we took away from it was to simplify the combat system so that’s been completely redone and has been implemented. Should make for a very low learning threshold for our  users. Thanks to all the folks who took time to respond to the play tests.

If you are interested in testing out our pre-alpha tests as we move along, let me know via email or twitter (click the + button up in top right corner for contact info) and I’ll make sure you get a copy when we have a new version for play testing.